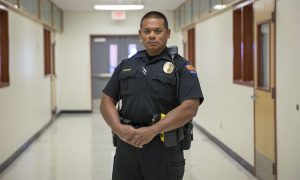 Today marks six months since the horrific Parkland massacre, in which a former student stormed Marjorie Stoneman Douglass High School with an AR-15 and killed 15 students and 2 teachers.

In the wake of Parkland, the ongoing gun debate in our country has reached a near fever pitch, as hysterical progressives try to argue in favor of restricting Second Amendment rights despite the fact that the Broward County Sheriff in Parkland were well aware of the shooter’s violent nature and had several opportunities to charge him with crimes that would have prevented him from being able to purchase the AR-15 or any other weapon.

The discussion of school safety has sadly taken a backseat to inflammatory rhetoric about the NRA and law-abiding gun owners, and the best argument the left can come up with against arming school guards that it would “make schools like prisons.”

Are our children not valuable enough to keep safe with the same weaponry we use to keep banks, politicians, or government buildings safe?

The district won’t fund the acquisition of firearms and the rifles will be locked up in the schools, according to district officials.

The Bismarck officers currently carry handguns, which Stugelmeyer said won’t help if they need to shoot from a distance.

“I fully believe that we have some solid preventative measures in place, and generally our schools are safe,” he said. “But we have to do everything we can to be prepared for something if it did happen.”

It’s crazy to think some people think that it would somehow not work to arm school resource officers with rifles or even just handguns.

What are the odds a school is more likely to be shot up if there are trained, armed school resource officers vs if there…aren’t?