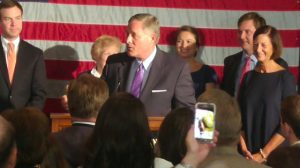 The North Carolina Republican Party has voted to censure Sen. Richard Burr on Monday after he voted this past weekend to convict former President Donald Trump during his second impeachment trial in the Senate in an attempt to prevent him from ever holding office again.

State Republican Party officials got together in an emergency session on Monday evening and voted unanimously to censure Burr, who as of now is planning on retiring in 2022 instead of running for reelection. Burr voted to convict Trump on Saturday of inciting the riot that rocked the Capitol on January 6.

“It’s important for the party to go ahead and put out a vote and a statement that it disagrees with Senator Burr’s vote, but in terms of practical impacts, it is just that. It’s a resolution,” North Carolina state party chairman Michael Whatley said, according to NBC News.

Burr hit back at the state party in a statement, accusing the state GOP of abandoning principle in favor of Trump.

“It is truly a sad day for North Carolina Republicans,” Burr said in a statement. “My party’s leadership has chosen loyalty to one man over the core principles of the Republican Party and the founders of our great nation.”

Burr released a statement on Saturday in which he explained his reasoning for casting a vote in favor of convicting the former president.

“The President promoted unfounded conspiracy theories to cast doubt on the integrity of a free and fair election because he did not like the results. As Congress met to certify the election results, the President directed his supporters to go to the Capitol to disrupt the lawful proceedings required by the Constitution. When the crowd became violent, the President used his office to first inflame the situation instead of immediately calling for an end to the assault,” the senator said.

“As I said on January 6th, the President bears responsibility for these tragic events. The evidence is compelling that President Trump is guilty of inciting an insurrection against a coequal branch of government and that the charge rises to the level of high Crimes and Misdemeanors. Therefore, I have voted to convict,” Burr went on to explain.

“North Carolina Republicans sent Senator Burr to the United States Senate to uphold the Constitution and his vote today to convict in a trial that he declared unconstitutional is shocking and disappointing,” Whatley said in response to Burr’s vote.

This was a good move on behalf of the North Carolina Republican Party. The RINOs need to be reminded that the party has now forever changed because of Trump and if they wish to remain relevant, they need to forego their dreams of appeasing the establishment.