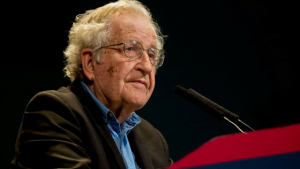 In a completely reasonable and level-headed speech given to St. Olaf College on Friday, New Left intellectual Noam Chomsky informed students that Republicans and Christians are intent on destroying the world.

Oh, and North Korea and radical Islamists are the good guys.

Just another day on an American college campus.

College Reform has the story:

Nuclear war and global warming were the two forces outlined as the primary threats to humanity, but President Donald Trump and the conservative movement in general also came under fire throughout the speech for their stances on these two issues.

Chomsky said he wasn’t surprised with the outcome of the 2016 presidential election, asserting that “for well over a century American elections have been mainly bought, literally,” and that he thinks Trump received “huge media support,” but added that he is, however, unhappy with the current administration.

So, in short, Chomsky basically just adds an intellectual sheen to the same over-dramatized whining about the results of a fair, democratic election in the freest nation in the world.

He also clearly hasn’t flipped on a cable TV network in at least two years, if he thinks Trump won thanks to media support. But hey, he’s the world-renowned intellectual, not me.

Chomsky then set his sights on the recent newfound peace between North and South Korea, a feat no American president has been able to achieve.

“Trump, declare victory [in North Korea] if you wanna prance around in public, but please go away and let us move towards peace, disarmament, and unification without disrupting the process,” the professor requested with regard to the ongoing tensions between the United States and North Korea.

Chomsky summarized his thoughts by characterizing North Korea as a nation seeking peace, speculating that “Trump will find it hard to threaten military action against a country that’s extending an olive branch.”

Right…because that was working out so well before Trump. Tell me again how Presidents Obama and Clinton handled North Korea?

He also told students that Republicans who meet alarmist claims of climate change with skepticism and support certain policies accordingly are engaged in a “unique insanity which is dedicated to destroying organized human life.”

There was presumably no mention of democrats who convince themselves that gender is not dictated by basic biology and the unique insanity of these policies. Anyway…

“By now, half of Republican voters deny that global warming is taking place at all, and only 30 percent think humans may be contributing,” Chomsky lamented. “I don’t think you can find anything like that among any significant part of the population anywhere in the world, and it should tell us something. One thing it should tell us is there’s a lot to do for those who hope that maybe organized human life will survive.”

When asked if he thought that radical Islamization is a result of ideas (yes) or U.S. foreign policy (seriously?!), Chomsky essentially directed the audience to disregard the foreign leaders known to be funding ideologically Islamic terrorism against the West and the countless Islamic leaders who openly profess to the end goal of taking over the world in the name of Islam, and focus instead on Christianity, as “that’s something we can do [something] about.”

“People in high places now claim to be devout Christians, and on the basis of Christian ideals they’re saying let’s proceed to destroy the world,” he explained, adding, “I don’t know anybody in the Islamic world that’s doing that.”

Just….wow. Do you want to tell him, or should I?