No, Michelle, Women Don’t Need to Be Democrats to Think Freely 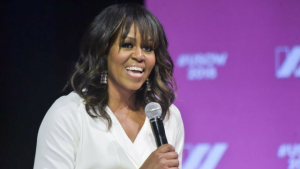 If we’ve learned anything from Kanyegate (is that what we’re calling it? I need a name), it’s that the Democrats do not like it when anyone breaks free from their voter plantation.

Dems think they have an iron grip on all minorities, immigrants, LGBTQ etc., but one of their most dearly-held demographics is women.

Since the 60’s when they “liberated” women from marriage and motherhood, Democrats live in constant denial that any woman would dare to challenge their narrative of oppression and “equality.”

They dismiss the existence of conservative women as poor, helpless women who are clearly oppressed by the patriarchy, unable to think for themselves. Because you see, if they could think for themselves, they would most certainly be democrats, right?

This is obviously how former First Lady Michelle Obama thinks about female Trump voters, who she said recently she was “concerned” for.

“In light of this last election, I’m concerned about us as women and how we think,” Obama said in comments made at United State of Women Summit in Los Angeles over the weekend. “What is going on in our heads where we let that happen, you know?”

She also referred to Hillary as “the most qualified” candidate in 2016 (bahahahahahahahaha), lamenting that anyone would dare vote against her.

“When the most qualified person running was a woman, and look what we did instead, I mean that says something about where we are,” she said. The Daily Signal notes this is a throwback to comments previously made by Obama that “any woman who voted against Hillary Clinton voted against their own voice.”

Sorry, ladies, many, many women in this great and diverse nation simply do not see their own voices represented in Mrs. Clinton’s.

The Daily Signal points out that “In the 2016 election, 52 percent of white women, 4 percent of black women, and 25 percent of Latina women voted for Donald Trump. Today, despite multiple scandals and investigations, 41 percent of Americans approve of the president—and 52 percent approve of how he’s handling the economy.”

Voting for Trump might say something about what a terrible candidate Hillary was, but it definitely doesn’t say anything about the state of women in America, except to say that they’re springing the Democrat plantation just like Kayne!