No Big Surprise: Satanic Temple Not A Fan Of Texas Heartbeat Bill 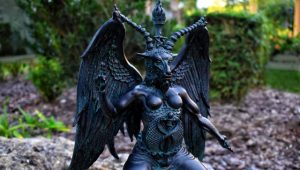 Guess what, guys? The Satanic Temple has come out and condemned the Texas Heartbeat Act via a stern letter sent to the Food and Drug Administration complaining the law violates its members’ religious liberty.

So apparently murdering babies is an important tenet of the faith for Satanists? Sounds about right.

“The Satanic Abortion Ritual is a sacrament which surrounds and includes the abortive act. It is designed to combat feelings of guilt, doubt, and shame and to empower the member to assert or reassert power and control over their own mind and body,” Matthew Kezhaya, the Temple’s general counsel wrote in the letter.

“The REMS prescription requirement substantially interferes with the Satanic Abortion Ritual because the Government impedes the members’ access to the medication involved in the ritual,” the letter went on to read.

Abortion laws in TX violate our religious rights and TST has taken legal action. If TX judges abide by the Constitution and legal precedent, then those who share our deeply held beliefs will be exempt from the state’s inappropriate efforts to restrict access to abortion services.

As a result of this infringement, The Satanic Temple demanded an exemption on the grounds of religion, Kezhaya wrote.The letter cited the Religious Freedom Restoration Act, which allows Native American groups to use peyote and other drugs in religious ceremonies.

Apparently, the temple “has every desire to ensure the health and safety of its membership, the issue is with governmental control over whether TST’s membership can obtain access to these drugs,” he wrote.

Like stated in the title of this piece, this isn’t likely going to shock anyone. After all, what could possibly be more demonic than wanting to murder babies in the womb? Of course they want this to be legal.

Let’s hope more and more states take a cue from Texas and come up with their own bills like this and we see the beginning of the end of abortion in this country.