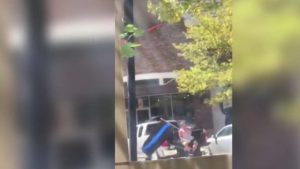 You seriously cannot make this stuff up.

An Arkansas man known for making an effort to publically show his support for law enforcement had the police called on him last week…for waving a pro-police flag outside a Nike store without bothering anyone.

The Blaze reports that Jimmie Cavin, a passionate supporter of law enforcement and first responders, sat in the back of his pickup truck and waved his pro-police flag across the street from a Little Rock Nike store.

Cavin says he had been there for about 15 minutes when an officer approached him, having been called due to a “disturbance.”

This disturbance, of course, was a man waving a pro-police flag.

Again, let me reiterate: the Nike store called the police to report a man showing support for the police.

How did that conversation go with the dispatcher?! How can you honestly simultaneously be concerned about a man showing support for police and reliant upon the police to show up and restrict said man’s free speech?

Cavin, who says he supports Kaepernick’s right to protest, although he disagrees with his perception of police.

He was clearly simply practicing his own right to protest, and, as he told reporters from Fox 16, “what better place to show support for police than right outside the Nike store?”

I don’t know about you, but that makes perfect sense to me, especially considering his form of protest seems no different than Kaepernick’s, whose merchandise was no doubt being peddled inside.

If you work for Nike, you’ve got to realize that right now, a lot of people are pretty annoyed at Nike for featuring the face of a man who once wore socks depicting pigs dressed as policemen to “protest” “police brutality.”

Plenty of decent, ethical men and women of law enforcement put their lives on the line daily to protect Nike stores from flags every day, who are they to try to stop this man’s protest of their store?

I think the stupid just caved in on me. I’m totally confused now.

That is to say…this is beyond ridiculous. Grow a thicker skin, Nike employees. Sheesh.