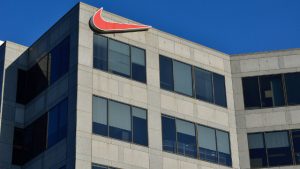 When the whole kerfluffle surrounding NFL quarterback Colin Kaepernick calling for the Betsy Ross flag shoe from Nike to be pulled from shelves, the company’s stock took an initial tumble, but it seems to be recovering rather well, spiking just days after the decision to remove the shoe was made.

This is kind of disappointing, but not at all surprising. Folks in this country seem to care less and less about patriotism, honor, and respect, especially concerning the American flag and our beautiful history.

“The company’s shares closed at $86.82 on Friday, up from $84.53 on July 2. The boost came one day after the company pulled its Air Max 1 Quick Strike Fourth of July,” Business Insider reported Monday, noting that shares “experienced an initial slide in the wake of the controversy, particularly after Arizona Gov. Doug Ducey announced he was withdrawing financial incentives for a Nike manufacturing plant to protest the company scrapping the design.”

‘The Betsy Ross Flag”-edition shoe was reportedly deemed “offensive” by Kaepernick, who scored a multi-million dollar sponsorship deal Nike last year — an event that sparked its own wave of controversy at the time.

The patriotic shoe included a U.S. flag with 13 white stars in a circle on the heel of the sneaker, “a design created during the American Revolution and commonly referred to as the Betsy Ross flag,” reported The Wall Street Journal. Notably, the supposedly racist Betsy Ross flag was flown during the inauguration of former President Barack Obama.

Conservatives, however, have been vocal with their displeasure with the athletic gear company, calling for a #WalkAwayFromNike boycott.

“I love America. I stand for the anthem, respect the flag & honor the men & women who fought to defend our Nation,” Senator Ted Cruz (R-TX) posted on Tuesday morning. “I respect Free Speech & I’m exerting mine: until [Nike] ends its contempt for those values, I WILL NO LONGER PURCHASE NIKE PRODUCTS. #WalkAwayFromNike [retweet] if you agree.”

I love America. I stand for the anthem, respect the flag & honor the men & women who fought to defend our Nation. I respect Free Speech & I’m exerting mine: until @Nike ends its contempt for those values, I WILL NO LONGER PURCHASE NIKE PRODUCTS. #WalkAwayFromNike RT if you agree. https://t.co/IvXNTgvlHq

Our flag is not simply a piece of cloth that represents our country. It’s a symbol of the principles that make our nation so awesome and amazing. It represents the liberty we have that has been purchased by the blood of brave men and women who have served our nation in the military and sacrificed all they have to ensure our way of life is defended from our enemies.

It’s sad and tragic to see so many folks okay with spitting in the faces of those who have fought for our rights. Let’s hope the culture changes and shifts away from this insanity.