Nick Sandmann Takes on ACLU Associate, Professor Who Said He Was ‘Dangerous’: ‘I Will Not Be Cancelled’ 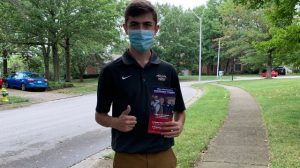 Former Covington Catholic student Nick Sandmann is becoming more and more of a hero for the conservative movement as he continues to stand strong against the bullying tactics of the radical leftists in this country who are doing their best to tear him down.

Sandmann recently took a ACLU associate and college professor to the woodshed for saying he was “dangerous” and a “provocateur” and that officials at Kentucky’s Translyvania University should keep a close eye on him during the first year of attending the school.

The young man responded by saying that he’s a “pro-life conservative Republican college student who won’t let cancel culture silence me,” in a Fox News op-ed he penned.

A Transylvania University professor, Dr. Avery Tomkins, initially defended Sandmann’s presence, telling the writer that “While I certainly don’t support or agree with his views, and find his public behavior and rhetoric atrocious and uninformed, we can’t not admit academically qualified students due to their political and personal views.”

Then, though, she pledged to keep the ACLU and others appraised of Sandmann’s activities.

“If he ends up in my intro class, fine. He might learn something that is actually based on research and evidence. I’m well aware of the anti-intellectual views tied to the organizations he’s part of,” she said. “If he were to cause problems by being disruptive, trolling, or engaging in unethical behavior of any kind, I would immediately document it (just like I would for any student doing the same thing) and he would just be putting himself in a position for me to file a conduct report.”

The same professor went on to say that the school, which she referred to as “Transy” wouldn’t be a good home for Sandmann. The reason why? Because, according to her, Sandmann doesn’t fit in with the school’s “mission.”

That mission does not seem to have much to do with excelling academically.

“So should only liberals and those on the far-left be able to get a college education?” Sandmann asks in the piece published by Fox News. “Should there be an ideological purity test required that bars conservatives and Republicans? That’s a pretty frightening idea and sounds like something you would expect in a totalitarian state, not a democracy where we are all guaranteed free speech by the First Amendment to the Constitution.”

“Colleges have a reputation of being toxic places for conservative, pro-life ideas like the ones I hold. But an alumni assuming I’ll act in a certain way before even meeting me? Well, that’s a new low,” he goes on. “To those who are inclined to write my future for me, I say let me define myself. I will not be canceled.”

Sandmann is currently working with Senate Majority Leader Mitch McConnell’s reelection campaign and is planning to start college this fall.