Nice Try, NYT, But Those Trump Tax Returns Don’t Tell Us Anything We Didn’t Already Know 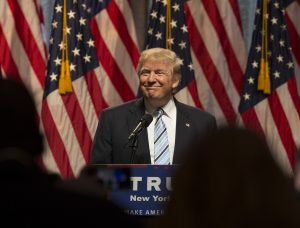 I can imagine the champagne corks careening through the air over at the New York Times when a stack of President Donald Trump’s tax returns hit their desks.

The Don has withstood every effort from the leftist hordes to get their claws on his private financial information. Surely this must be the biggest scoop of the year!

There’s just one thing, though, NYT. Y’all might want to shelve the party hats ’til next time, ’cause the contents of the dusty old tax returns published this week were already fairly common knowledge.

The tax returns, which cover several years in the 1980s, don’t reveal a whole heck of a lot about Trump’s finances back then—surely nothing nefarious or relevant to his presidency.

But, hey, you’ve got newspapers to sell. It happens.

Thanks to the Times, we are blessed with the reminder that for roughly a decade, Donald Trump paid a low tax rate due to massive losses, deductions, and such. How thrilling.

The Daily Wire’s Michael Knowles breaks it down:

The charitable view of that is that Donald Trump took major business losses. We know there was a huge downturn in New York real estate at that time. We know that the tax code was favorable toward real estate developers, toward people who were building things, so that seems pretty fair.

The uncharitable read of that document is that Donald Trump cheated on his taxes, that he paid a rate that was too low. But this one is kind of hard to believe because Donald Trump is under audit currently, I believe, and he certainly was under audit two years ago. This is a very wealthy guy with a lot of business interests who has been audited. If he really underpaid on taxes one would expect that that would already be discovered by now.

Not only is the NYT report utterly devoid of any evidence of sordid deeds by the president—did they really expect to catch something the IRS didn’t?—the angle that his returns indicate irreconcilable financial failure is something Trump himself debunked over a decade ago.

In a 2004 episode of his hit reality show The Apprentice, Trump explained how his casinos hit a series of major snags back in the ’80s that sunk him into heavy debt for a few years. However, the financial phoenix was able to restore his businesses to solvency and profitability, prompting him to write his 1997 book The Art of the Comeback.

“It wasn’t always so easy. About 13 years ago, I was seriously in trouble. I was billions of dollars in debt,” Trump said on The Apprentice. “But I fought back and I won big league. I used my brain. I used my negotiating skills. And I worked it all out.”

“Now my company’s bigger than it ever was, stronger than it ever was and I’m having more fun than I ever had. I’ve mastered the art of the deal and I’ve turned the name Trump into the highest quality brand,” Trump added at the time.

For all the effort they must have gone through, the New York Times essentially confirmed what Trump said in 2004. He claimed $1 billion in business losses, paid little in taxes while his business struggled, and quickly bounced back and paid proportionately higher taxes again. The end.

Best of all, the Times actually wrote an article back in 1995 commending the “Comeback King” for turning his business around in such an epic fashion.