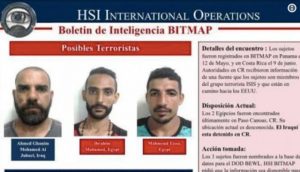 Law enforcement officials located in Nicaragua have arrested four ISIS terrorist suspects who were allegedly on their way to the U.S. border, where they were planning to enter the country. Two of these individuals were from Iraq, the other two from Egypt.

Oh, but according to the left, anyone who wants to cross into our country just wants to come here and create a better life for their family.

Darby and Ortiz exclusively reported earlier this week that U.S. officials had warned the Mexican government that three ISIS terror suspects had arrived in Central America and were believed to be headed to the U.S. border by traveling through Mexico.

Reuters reported that after Nicaragua arrested the men yesterday morning, “the army handed them over to national police for investigation, whereupon they were taken to migration authorities for deportation via the Penas Blancas border crossing,” adding that “the four men were delivered to Costa Rican migration authorities” later that evening.

This right here is why we need to be strictly enforcing our borders and have that wall built up as soon as possible. Those who don’t think having this sort of security is necessary would have a whole lot of explaining to do if these four got into our country and carried out terrorist attacks.

The safety of American citizens is of the utmost importance to conservatives, but unfortunately, to those on the left, all they see is a missed opportunity to get illegal immigrants on the voter rolls, caring little for loss of life that might happen in the process.