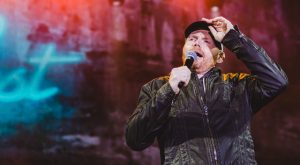 Comedian Bill Burr angered some folks — big shock, right? — this weekend with some of the jokes he made during his appearance at the 2021 Grammy Awards.

As you can already guess, these jokes got Burr labeled a racist and a movement to cancel him sprung out from the fragile snowflakes on the left.

However, his wife, Nia Hill, was not about to put up with these false allegations. Oh, and by the way, his wife is black.

“While I’m not suggesting Bill Burr is a racist, a white man having a non-white wife can sometimes be a sign of racism,”Clayburn Griffin said in a post on Twitter, suggesting that Hill is just Burr’s “minority sex servant.”

“They may very well have one because they’re racist,” Griffin went on to add.

While I'm not suggesting Bill Burr is a racist, a white man having a non-white wife can sometimes be a sign of racism. So you shouldn't assume someone isn't racist just because they own a minority sex servant. They may very well have one because they're racist.

Griffin was raked over the coals for his idiotic comment.

Well done. Worst tweet ever. And the competition is tough.

Dude, you suck. People in interracial relationships struggle enough with ignorant perceptions without you adding to it.

Burr set off critics during his presentation of numerous awards at the Grammys, ironically meeting the comedian’s prediction at the award show that feminists were going to go “nuts.” The Daily Wire reported:

After walking on stage to piano music, Burr joked, “Was I the only one who wanted to kill himself during that piano solo?”

“I bought a suit for this. I thought I was gonna be on TV. I’m such a moron. I am losing so much money right now,” he then joked about himself. The award show was remote due to COVID-19 precautions.

When he presented the best regional Mexican music award, he stumbled over the pronunciation of winner Natalia Lafourcade’s last name. “I can’t say the name,” he said. “The Grammy goes to Natalia Lafourcade. I will accept on behalf of her. If I butchered her name, I’m sorry.”

“[How many] feminists are like, going nuts,” Burr later mocked, presenting best tropical Latin album. “Why is this cis-white male doing all this Latino stuff.”

This is the kind of insanity the left promotes these days. There is absolutely no way to appease them. If you don’t date people of color, you’re racist. If you do and you marry them, you’re racist.

After you slap a little logic on the left-wing worldview, it crumbles very, very fast. Unfortunately, liberals never seem to think their view on things all the way through to its logical conclusion. If they did, perhaps they wouldn’t say such stupid things.