NHL Star T.J. Oshie Breaks Down Talking About His Dad With Alzheimer’s After Stanley Cup Victory 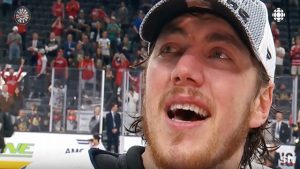 Thursday night was huge for the Washington Nationals as they finally, after a long, long wait, sealed the deal and won the Stanley Cup: the prize every hockey kid dreams of winning from the very first moment they lace up their skates.

While there were plenty of emotional moments after the Caps seized their victory, the highlight of the entire evening was T.J. Oshie speaking about his father with Alzheimer’s and how he would remember his son bringing home the Stanley Cup.

This will hit you square in the feels.

But there was profound sadness, too, for one of the team’s stars, T.J. Oshie. His father, Tim, suffers from Alzheimer’s and his memory is now fading fast, five years after he was diagnosed.

In a series of interviews on the ice after the Caps defeated the Vegas Golden Knights 4-3 to win the Cup series 4-1, an emotional Oshie, 31, talked about what hockey’s biggest trophy means to him and his father.

“To have him here is amazing,” Oshie said of his father in another interview. “He doesn’t travel very well, and I’ve been trying to figure out how to get him out all playoffs. It was kind of a perfect storm to get him with my aunt and sister out from Seattle.”

“He doesn’t remember a lot of stuff,” Oshie said through tears. “But you bet your ass he’s going to remember this one.”

Oshie became a household name across America four years ago while playing for the U.S. team at the Sochi Olympics in Russia. He was clutch during a shootout against Russia, when the U.S. coach sent him out six times, scoring four goals in the eight-round shootout — including the game-winner for the Americans to beat his Capitals teammate Alex Ovechkin and the Russians.

There’s no relationship more critical to a boy’s development than the one he has with his father. The way he interacts with his dad will shape the man he is to become for the rest of his life, which is why, when a man has a good dad, you see the sort of reaction Oshie is giving in the video above.

Here’s a hearty congratulations to Oshie and the rest of the Caps on their big win.