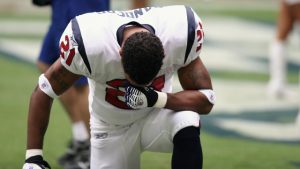 A new survey has delivered some bad news to all the NFL players out there who have decided to disrespect their country, spit on their liberty, and dishonor those who have bled and died for their freedom.

A new study has determined that a majority of Americans fully support the recent ban on kneeling during the National Anthem put in place by the NFL.

This isn’t all that surprising, given that so many people walked away from watching and attending games the last two years, most folks agreeing that the tactic was not the best way to raise awareness since it was so disrespectful.

Of American NFL fans, 56 percent approved of the ban, and 42 percent opposed it.

Of those who considered themselves to be “big fans” of the NFL, 59 percent approved, while 40 percent did not.

The poll stated there were 63 percent of individuals surveyed who said that the decision wasn’t going to affect their plans to watch the season, with 13 percent saying they were more likely to watch with the ban in place.

So, the lesson here, is that if you want to use your massive platform to spread awareness of some social cause you believe in, there are better ways to do it than disrespect the country that provides you with the opportunity to earn millions of dollars to play a game.

And for teams and their owners, the message that this survey sends is that Americans will hit you where it hurts — the bank account — if you go against their shared values.