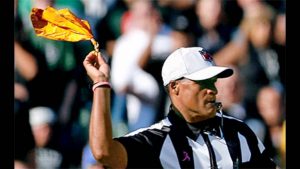 Not sure this is what Commissioner Goodell had in mind when he emphasized community outreach. A pair of new videos showing several NFL players taunting fans, and screaming the “f-word” have been revealed.

The videos from last Monday’s game between the Kansas City Chiefs and the Washington Redskins show Redskins player Terrell Pryor and Chiefs player Marcus Peters going off on fans who were yelling at them from the stands.

In the first video, Chiefs defensive back Marcus Peters responds to fans who were likely offering less than kind criticism after he gave up a 44-yard touchdown early in the game.

Peters is seen yelling out, “F**k you, b**ch,” and then slamming his helmet to the ground in anger:

RT if you agree @Chiefs player Marcus Peters should be suspended for cussing out fans! @nflcommish #BoycottNFL pic.twitter.com/AXWzv55yoE

The second video shows Redskins wide receiver Terrell Pryor, who erupted on hecklers as he walked toward the tunnel that leads to the team locker room.

Pryor is seen yelling out the “f-word” at fans while flipping them the finger and raising his helmet as if he intended to throw it. A Redskins staffer is then seen trying to calm the player and usher him quickly into the tunnel: