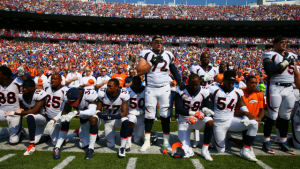 The NFL kneeling protest was a big, fat failure.

Sure, it caught on and spread like wildfire through the NFL, fueled by a series of Trump tweets last fall, and spreading even into other sports like baseball and the WNBA. It got a ton of media attention and added to the already massive ideological divide between Americans that reached fever pitch in 2016 and 2017.

But did it achieve anything the players were trying to achieve?

“Most NFL players won’t realize it, but the owners did them a favor on Wednesday. It gets back to a simple rule of persuasion,” writes David Whitley of the Orlando Sentinel following the NFL’s announcement that they will fine teams whose players kneel during the playing of the National Anthem this season.

“Don’t start your argument by insulting half your audience,” Whitley observes.

He’s right. The anthem protest didn’t divide Americans because most NFL fans don’t care about the troubles facing the African-American community or whether or not young black men are being unjustly killed by police en masse, which was why Colin Kaepernick began his now-infamous kneeling protest back in 2016.

They divided Americans because, no matter what your race, ideology, religion, or political party, we rise for the National Anthem to pay homage to the country in which we can debate such issues, and to remember those who have fought, bled, and died to protect our way of life, our democracy, and our unprecedented liberty.

To many NFL fans, kneeling during the National Anthem was like walking up to someone, punching them in the face, and then demanding they listen to your grievances with someone who just punched them in the face.

One has nothing to do with the other, and is all the more offensive because of it.

Of course, Whitley’s observation that the players have been done a favor by the new policy might be lost on many of the players themselves, who are now reportedly considering other forms of protest.

“I talked to a former NFL player yesterday who has said that players are already talking about other ways in which they can protest,” said NBC’s Craig Melvin on “Today” Thursday, according to The Hill. He did not specify which player he had spoken to.

“Other journalists,” The Hill notes, “including NFL Media reporter Jim Trotter, said they are also hearing of some players considering other forms of protest, including staying in their locker room for the national anthem.” The NFL’s new policy will not punish players who choose to stay in the locker room for the anthem.

At the end of the day, these are insanely wealthy professional athletes with a fair amount of influence–perhaps if they’re no longer allowed to kneel, it will occur to them how ineffective kneeling was in the first place.