NFL: Going Out Of Business FAST! 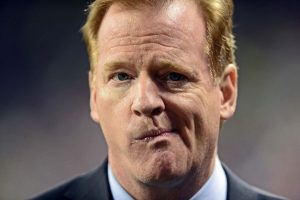 Americans of all races are obviously fed up with the NFL. The drastic decline in viewership is proving it! The hypocrisy demonstrated by overpaid and entitled athletes protesting a non-existent oppression has disgusted fans nationwide.

Brietbart points out that “with the NFL’s Week 4 in the rear-view mirror, a review of TV ratings through the league’s first month show that the NFL has lost millions of viewers year-over-year, a decline that has picked up speed so far this year.”

It seems everyone is mad at the NFL.

Overall, viewership is down seven percent over 2016, which is bad enough for the league. However, this year’s slippage is not the first. Indeed, 2016 — the year of the first national anthem protests — saw a nine percent decline over 2015.

According to an analysis by Awful Announcing, the NFL’s ratings are crashing with steady loses during Week 4 for 2015, 2016, and 2017. Every single overall age bracket, including the important youth demographic, has seen a drop. The numbers show a 12 percent drop in viewership among the 18 to 34 age bracket, a six percent drop among middle-age viewers, and a four percent drop in the over 55 demo.

Ethnic breakdowns also show across the board drops with only a very few demos gaining traction.

Latino or Hispanic viewers is down overall with only one demo staying relatively unchanged. Only the 55 and up age bracket remained status quo, while every other age group for both men and women fell by 10 percent on average and down two percent for the 35 to 54 bracket.

White viewers saw the most significant declines. The loss is especially important because white fans make up the bulk of the NFL’s followers. Numbers fell in every single demo among whites for both male and female viewers, with viewership off in the important youth by the steepest margin of 14 percent. The result is a loss of a million white viewers over Week 4 of 2016. And 2016 was itself a loss of two million viewers over that of 2015.

However, though the national anthem protests are thought to favor African American sentiments, the NFL lost black viewers in every single demo as well. The declines in the important 18-34 and 35-54 brackets saw the most significant losses, with a 14 percent and 11 percent loss respectively. The over age 55 bracket was the only demo to stay relatively unchanged, though it saw a small 1 percent decline.

Overall, African American viewership fell by 8 percent over 2016. This followed a 4 percent loss in 2015 and a two percent decline in 2014.

There are a lot of factors piling up against the NFL, all of which combine to put a significant dent in the league’s viewership. From people cutting the cord, to social concerns, such as worries over player safety and criticisms of players involved in domestic violence. All the way up to and including the disgust many viewers have over the protests during the playing of the national anthem.

Like Awful Announcing said, for whatever reason, “…everyone is mad at the NFL.”