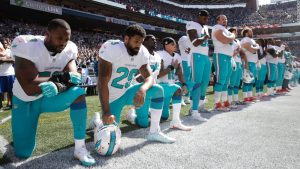 NFL ratings from the first game of the season were not impressive.

As DailyCaller.com tells us: the Kansas City Chiefs soundly defeated the New England Patriots Thursday night on NBC, but apparently not as many people in America were interested in watching professional football as they have been in the past.

Still, with a 14.6/25 in meter-market ratings, the beginning of the new NFL season was not exactly a winner for the league and NBC. While better than anything on any of the Big 4 have done in the overnights in months, those numbers are down a sobering 12% from the early results of the Denver Broncos’ tight 21-20 victory over the Carolina Panthers in last year’s kickoff on September 8, 2016. Long season short, that’s not a good start for either the NFL or networks hoping to gain some traction from last year’s ratings blows.

It would seem that many people were also turned off by Colin Kaepernick and other players protesting the national anthem last year and in the pre-season. Kaepernick is unemployed, so NFL executives were probably hoping to get some of that audience back.

However, it would appear after Thursday night it seems that some people have zero intention of ever coming back to watch NFL games.