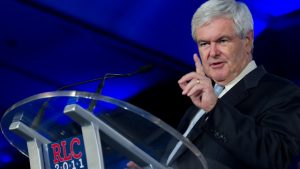 Former House Speaker Newt Gingrich has finally revealed who he really believes to be responsible for the attack that occurred at the Capitol back on January 6, 2021, and it’s none other than House Speaker Nancy Pelosi.

Gingrich, who made an appearance on “The Ingraham Angle” on Fox News Thursday evening, stated that Pelosi should have made arrangements to have adequate police protection present when Congress met together to certify the results of the 2020 presidential election on Jan. 6, 2021.

He claimed Democrats don’t want Republicans looking too closely into the events of Jan. 6.

“We know, for example, in Michigan that the FBI was deeply involved in creating an entire project to kidnap the governor, and then pretend it was being done by White nationalists, when in fact all the leading figures were FBI activists,” Gingrich stated.

“So there’s reason to question everything about what happened on Jan. 6,” he added.

He said he was “deeply offended” by the actions of the protesters at the Capitol.

But the former speaker then added: “I was also really offended that the current speaker, Pelosi, failed so totally in her job, which was to make sure this didn’t happen.”

Meanwhile, House Minority Whip Steve Scalise, R-La., told Newsmax on Tuesday that should Pelosi retire this year or lose her speakership by losing the majority in the midterm elections, there will be a ”massive fight” among party leaders for control.

”I think you’re going to see a massive fight within the Democratic conference that they’ve been needing to have, probably wanting to have, for over 20 years,” Scalise stated.