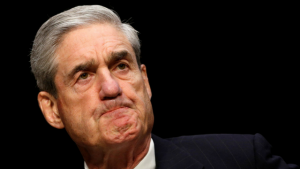 Apparently, the fake news media has gotten so far ahead of themselves, even the Mueller investigation is telling them to chill out.

In a court filing this week, Mueller’s office has addressed reports made by the New York Times and the “Democracy Dies in Darkness” Washington Post, who both made what have been revealed as entirely fabricated reports of a raid of former Trump campaign manager Paul Manifort’s condo.

This is particularly hilarious, as earlier today we reported on ABC’s outrageously false headline that Manifort, who is currently in jail awaiting trial for charges of money laundering, had pled guilty to five counts of manslaughter. Apparently, the news media is simply beside themselves with Manifort’s indictment, understandably, because it’s the only indictment they’ve gotten out of the seemingly endless, not to mention baseless, Trump-Russia collusion investigation.

In a court filing this week, Special Counsel Robert Mueller’s office called out The New York Times and The Washington Post for their “not responsible” reporting on the FBI’s actions.

The reprimand, included in a footnote of the filing, was caught by USA Today’s Brad Heath:

Mueller's office says in a new court filing that reports that FBI agents conducted a "no-knock" raid of Paul Manafort's condo, or picked his lock, are false. pic.twitter.com/ZAXERFBjKb

As Law & Crime’s Matt Naham explains, the filing addressed false reports by both the Times and the Post on a supposed “early morning,” “no-knock” raid on Paul Manafort’s condo. The reports falsely asserted that federal agents “did not knock on the front door and picked the lock to enter.” The claim, Mueller’s team suggested, was completely fabricated, as was the assertion that it came from a leak by the Special Counsel.

“But, I do question the publication of the completely unsupported speculation that this revelation was an intentional leak by the Office of the Special Counsel,” the footnote reads. “No reporter had any facts to base that on, so I’m not sure why anyone printed it. It’s not responsible.”

The New York Times didn’t just include the fabricated detail in a story, they declared it in the headline: “With a Picked Lock and a Threatened Indictment, Mueller’s Inquiry Sets a Tone.”

The New York Times was also caught fabricating facts, in rather extravagant detail, apparently. They ran the headline “With a Picked Lock and a Threatened Indictment, Mueller’s Inquiry Sets a Tone,” when there was apparently no picked lock during the search, nor was the search conducted at dawn, which the NYT had claimed.

You think at this point the media would try a little harder not to be so obvious in their eagerness to smear anyone they can connect to Trump and Russia!