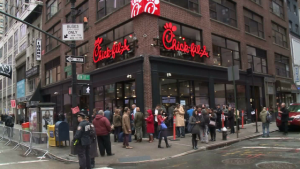 Man oh man, someone is triggered!

If you have the time, it’s certainly worth the read, but considering it is 1400 words and I’m assuming you have a life to live, I’ll break it down for you:

You will often forget, reading the article, that the author is speaking about chicken sandwiches, as he discusses the business model, corporate culture, marketing strategy, and core values of the third most successful fast food chain in the country as a creepy infiltration into the hallowed, sacred bubble of liberal New York where Christianity is clearly absolutely not allowed.

“New York has taken to Chick-fil-A…And yet the brand’s arrival here feels like an infiltration, in no small part because of its pervasive Christian traditionalism,” he writes, vividly describing the scene of the fast food chain’s latest opening in New York with the eloquent words “The air smelled fried.”

As he delves into what, exactly, makes Chick-fil-A just so threatening to the pure and holy New York City values we have all grown to know and love, he reveals the sinister presence of a statue of Christ in the chain’s headquarters in Atlanta and the fact that they close on Sunday.

What sort of horrendous theocracy are we living in?! What shall become of the utopian secular paradise that is New York City with this kind of enemy in the ranks?

Clearly, Piepenring feels no need to justify his own vitriol against the successful fast food chain for the simple fact that he believes being a Christian, and worse, being a Christian in New York City, is a carnal secular sin.

Because of this, he’s completely unaware of how ridiculous he sounds, bashing the well-loved company over the head for the personal beliefs of its founders and executives. Furthermore, it’s very likely that he’s quite bitter the chain has done so well in New York, and it is quite possible he’s also bitter about the fact that it’s hard to argue with the fact that the chain has done so well because of it’s pervasive Christian traditionalism.

But at the end of the day…it’s still just a chicken sandwich.