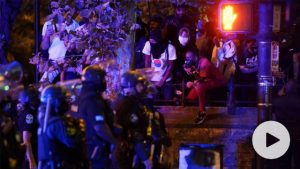 Facts are inconvenient things for the radical left-wing element in this country. Mostly this is because, as Ben Shapiro says, facts don’t care about your feelings. And well, we all know liberals are all about them feelings.

A brand new video has been released concerning the shooting of Breonna Taylor that shows the tense moments right after Louisville Police Sgt. Jonathan Mattingly was hit by gunfire.

Radicals in the Black Lives Matter movement have started up their rioting and looting in response to the Kentucky attorney general announcing now charges for the shooting of Taylor would be pursued.

In the bodycam footage – which attorney Todd McMurtry tells Fox News he received from Mattingly – an officer is heard repeatedly yelling “put him on the trunk” while colleagues purportedly escorted Mattingly away from the scene of the shooting for medical attention. Mattingly reportedly said a bullet struck his femoral artery and he later had to undergo surgery.

“They called him a ‘murderer,’ when all he did was defend himself,” McMurtry said in a tweet accompanying the video.

In a separate statement to Fox News, McMurtry said he represents “John in his affirmative claims against people who slandered him by calling him a ‘murderer.’”

Police in the video can also be heard saying “grab under his arms” and “cover him, let’s go” as they move the wounded officer. “Go a little faster,” one then says.

How many times is this same scenario going to play out and the Marxist folks in Black Lives Matter seize on it in order to help push an anti-American agenda?

Real racism does actually exist, but it’s on an individual level. The idea of institutional racism is one that doesn’t have much in the way of proof to support it. Again, that doesn’t mean there aren’t bad cops who profile and do other heinous things that are a clear abuse of their power and authority.

Those folks need to be removed from their positions. However, the vast majority of cops are just trying to do their jobs and protect our communities. It’s dangerous work. It’s unreasonable not to expect officers to shoot back after they’ve been fired on.