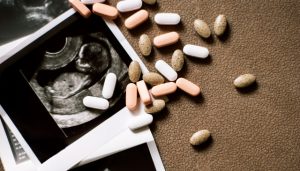 Photo of the fetus on an ultrasound scan and few pills on brown background. Ultrasound results in the 2 trimester of pregnancy. Infertility treatment. Artificial insemination. Having a baby with IVF.

Texas Gov. Greg Abbott, a Republican, signed another abortion law in the Lone Star State, and this one is really going to make the radical left in this country very upset. The law itself will place additional restrictions and raise the penalties for distributing abortion-inducing drugs.

Senate Bill 4 as the legislation is known, was signed during the second Texas special session, which ended back on September 2, and is set to take effect in December. The bill will prevent physicians and other providers from being able to dispense this kind of medication once a woman reaches seven weeks of pregnancy.

It also increases the criminal penalties for “intentionally, knowingly, or recklessly,” violating the state’s current ban on abortion.

The law also comes with some hefty consequences for providers who might try mailing abortion pills into the state.

Someone who violates this law could face a felony charge and end up carrying a fine of up to $10,000 and the possibility of 180 days or two years in prison.

“Doctors need to be present when patients receive these drugs so the patient knows what to expect from normal side effects and what needs to be addressed quickly before it turns into a serious issue,” Lucio went on to say during a Senate committee hearing that took place this summer.

S.B. 4 is in addition to Senate Bill 8, which leaves doctors vulnerable to lawsuits for aiding abortions once fetal cardiac activity has been detected, at roughly six weeks into pregnancy.

Supporters of abortion rights decry the limits being placed on women’s access to abortion.

“Anti-choice politicians have made their intentions abundantly clear, and they will stop at nothing to strip away reproductive freedom,” Adrienne Kimmell, who is the current acting president of NARAL Pro-Choice America, went on to tell the Morning News.

Those out-of-state-mail-order abortion medication providers discussed above could potentially be extradited to the state of Texas, according to Congresswoman Stephanie Klick of Fort Worth.

If you listen closely, you can hear liberals rocking back and forth and sucking their thumbs.