New Study Finds Stunning Number Of Americans, Including Democrats, Have No Clue What ‘Single Payer’ Means 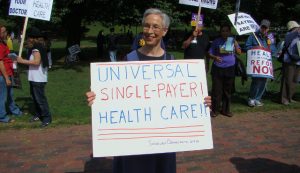 You know that old saying, “ignorance is bliss?” Well, that might be true to an extent, but it’s also one of the most destructive forces on the face of the earth.

Which makes the results of a brand spanking new study about the mind-blowing number of Americans, including Democrats, who have no idea what the term “single-payer” means in regards to health care.

These are the kind of people who end up getting radicals like Barack Obama elected president.

Under Medicare for All — a plan actively pushed by democratic socialists Sen. Bernie Sanders (I-Vt.) and Rep. Alexandria Ocasio-Cortez (D-N.Y.) — and any other single-payer system, the public would get their insurance through a single government plan, wiping out private health care.

And the plan wouldn’t be cheap. For example, a study published last July by the Mercatus Center revealed that the “conservative” cost estimate for the Sanders plan is $32.6 trillion over the next 10 years.

Yet, the newly released Kaiser study found that for a plurality of Democratic and Democratic-leaning voters the most important health care issue they want to see discussed by Democratic candidates is “lowering the amount people pay for health care.”

Those same voters — whose top priority is lower health care costs — revealed to KFF that they know taxes for most Americans (including themselves) would increase under Medicare for All. Nearly 80 percent of all Americans surveyed said taxes would go up under a national health plan. That figure includes 71 percent of Democrats.

Forty percent of those polled by Kaiser believe private insurance would still be the primary way Americans get health coverage under Medicare for All. This includes 39 percent of Democrats, 42 percent of independents, and 38 percent of Republicans.

Just imagine how scary it is to think the government could have control over your health care, deciding what kind of treatments they’ll pay for, what kind of care they think you need. Imagine they deny you treatment for something, simply because you’re too old and to them the cost of keeping you alive is far too high so they just let you die?

Death panels in this sort of system are not some wacky conspiracy theory. It’s the next logical step. Money is not an infinite resource. It eventually runs out.

Fifty-five percent of Americans believe that under such a system they’ll get to keep their insurance plans. Guys, the whole point of a single-payer system is, well, a single-payer pays for all of the cost of health care. In this case it’s the government.

This is truly a scary situation, folks. If this many people are voting when they’re completely uninformed, then we’re in deep trouble.