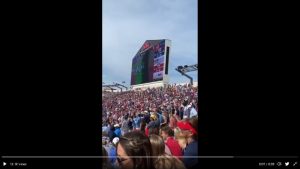 Crowds once again expressed their true thoughts and feelings this weekend concerning President Joe Biden by indulging in the latest craze to take the United States, which is a chant of “F*** Joe Biden,” and “Let’s Go Brandon.”

The cheer showed up during Saturday’s Arkansas-Ole Miss game, as well as at a Trump rally that took place in Iowa. The chant gained infamy after a reporter for a left-leaning news network misheard the chant as “Let’s Go Brandon,” which instantly became an internet meme.

But now it has been immortalized in a song that has gone viral.

Another plane carrying the same message was spotted in Auburn, Alabama.

The song, which only took 12 hours to go viral, features some rap lyrics like, “You know what they sayin,” as opposing chants of “Let’s Go Brandon” and “F*** Joe Biden” continue to play on in the background.

This, of course, is a reference to the misunderstanding that happened during the Talladega NASCAR event, where a reporter from CBS News interviewed driver Brandon Brown after the race.

While the chants of “F*** Joe Biden” were being shouted in the background, the reported claimed fans were saying “Let’s go Brandon!”