New Rumor Floating Around Hollywood: Is Roseanne Spinoff ‘The Conners’ Being Cancelled? 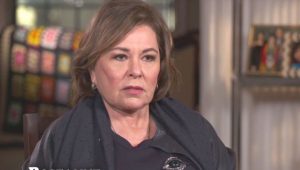 There’s no shortage of gossip and rumors floating around the liberal cesspool that is Hollywood, but every once in awhile a tantalizing morsel slips out in the media that makes even the most anti-gossip hound out there start drooling all over themselves.

One such rumor is the possible cancellation of the Roseanne-less “The Conners” spinoff, which no doubt would make diehard fans of the original “Roseanne” series tickled pink. However, it seems there’s not any good news or bad news in terms of what’s going on with the show.

The rumor got going in part from a comment by ShowBiz411 about ABC suspiciously ordering just one more episode in addition to the first run of ten.

“ABC has ordered 1 extra episode to the original order of 10,” noted Roger Friedman. “Sounds to me like a finale,” he speculated, then joked: “Someone wakes up and says they dreamt Roseanne died. There’s a cackle from the next room. Fade to black.”

Friedman’s suggestion followed his breakdown of “The Conners” ratings thus far, which he suggested are trending down in problematic fashion. The show “dropped in everything last night–total viewers, key demo,” he wrote. Its big Halloween episode was “beaten by everything- ‘NCIS,’ ‘The Voice,’ etc.” while the show lost ground in the key demo and total viewers, which were “down by 180K.”

Friedman also noted just how costly the cast of the show is for ABC. According to Variety’s numbers, John Goodman, Laurie Metcalf, and Sara Gilbert are each paid $375,000 per episode. Add the salaries of the other key cast members and you’re talking big money.

You know, you have to wonder if the higher ups at ABC are sitting around the table, wringing their hands and looking at each other, going “we made a huge mistake firing Roseanne.”

Because the truth is, it was a ginormous mistake, one born purely out of a fearful knee jerk reaction to some controversial comments. Should Roseanne have been punished? Sure. But to fire her completely within such a short amount of time is the epitome of unwise.

Maybe they’ll get the picture now.