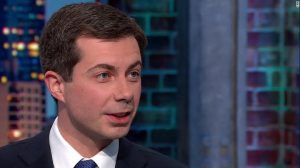 New reports are saying that Joe Biden has now chosen former South Bend, Indiana Mayor Pete Buttigieg to be the secretary of transportation for his incoming administration.

Well, that’s not the pick we thought we’d see, but it’s obvious that Biden’s pals are getting high prominent jobs in exchange for supporting him and his campaign for president.

Many see a Cabinet post for Buttigieg as essential for the former mayor’s political aspirations — giving him what many Democrats say is “needed experience” before he could mount another presidential campaign, according to CNN. Buttigieg is the first openly gay candidate nominated to Biden’s administration and, if confirmed, would be the first openly gay Cabinet secretary to be approved by the Senate.

Biden has promised to select a diverse Cabinet.

Now, this is if nothing happens between now and the inauguration. It’s still possible that some sort of bombshell could come out and Biden not end up getting his spot in the White House after all.

That, of course, seems sort of like a long shot at this point, but hey, it’s not over until it’s over, right?