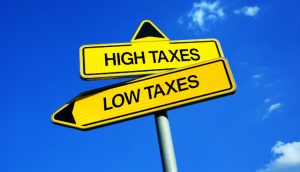 According to brand new research, last year saw large numbers of people high-tail it out of blue states like New York and Commiefornia, oops, I mean California, which have extremely high taxation rates, to red states like Florida and Texas, which have low-taxation rates.

A nonpartisan group that favors low taxes, known as the Tax Foundation, used data that was gathered from the census and commercial datasets from U-Haul and United Van Lines to help put together a list of which states experienced the biggest influx and outflow concerning population. The group pointed out that many of the states folks are leaving have higher taxes than the states where people have been relocating to.

New York, which is notorious for its high taxes, was the state with the largest percentage decrease, with a drop of 1.8% from April 2020 to July 2021. Washington, D.C., experienced a whopping 2.8% loss. Other states with big losses include Illinois, California, Massachusetts, and West Virginia.

As for increased migration, Idaho clocked in with the most growth at 3.4%, followed by states such as Utah, Montana, Arizona, South Carolina, Texas, Nevada, and Florida.

The report notes that a half dozen states in the top third for growth forgo individual income taxes, while four jurisdictions in the bottom third have double-digit income tax rates.

“The economy is changing, and if states want to remain competitive, their tax codes will have to change as well,” Jared Walczak, vice president of state projects at the Tax Foundation, went on to say to the Washington Examiner. “Workers are more mobile than ever before, and since they no longer need to live where they work, taxes will take a larger role in deciding where they call home.”

“States can either modernize their tax codes to reflect this new reality or risk finding themselves left behind,” he continued in a statement.

“Another major difference between a lot of the states seeing population loss and those seeing growth is political. California and New York are liberal bastions, while Florida and Texas consistently elect Republicans to statewide and national offices. Some on the Right have complained about the COVID-19 restrictions imposed in many blue states,” the report stated.

The only problem here is that the folks who are moving to red states haven’t learned their lesson from living in blue states with higher taxes and restrictive COVID rules and will likely vote Democrat and end up making red states purple or maybe even blue.

Let’s hope that doesn’t happen. There’s still time for folks to come to their senses before the 2022 midterms.