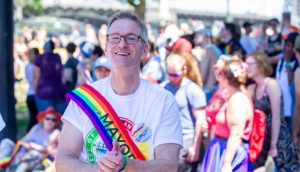 A new report from Oregon Public Broadcasting has revealed that Portland Mayor Ted Wheeler, a man who truly seems to be completely devoid of any sort of intestinal fortitude whatsoever, actually considered ordering Portland police to “stand down” in the face of massive civil unrest that led to riots and looting of the downtown area of the city.

Folks, this becoming the default strategy of leftists who have absolutely no concern for the well-being of their cities or the people who work and live their. All that matters is being politically correct and seeking to appease the criminals and miscreants running rampant in the streets.

OPB reports that, in “late July,” as the protests were entering their second month and suspected anarchists were ramping up attacks on the city’s federal courthouse, Wheeler texted a top aide and suggested that Portland officials instruct the police to turn a blind eye to the demonstrations, thinking it would de-escalate the violence.

“In late July, Mayor Ted Wheeler had an idea he hoped would end the nightly clashes between protesters and police in Portland. He texted Sonia Schmanski, a top aide, that he had a plan that was ‘high risk,’ but he added that the city had ‘nothing to lose,’” according to OPB. “His idea: Tell his police force to stand down from the demonstrations.”

“It was a move protesters had urged for months, arguing that police decked in riot gear needlessly raised the tensions of the nightly protests. Wheeler told OPB he, too, had noticed a ‘calming deescalating effect’ on nights when police stayed out of sight,” the outlet noted.

So wait a second. Would “protesters” be okay with cops out there sans protection on? Gee, isn’t that a little like the bears ordering you to lay on a plate and drizzle yourself in honey? Seems like a pretty suspicious request, don’t you think? Hmm.

This would’ve been a very bad move. Criminals would have felt emboldened to continue their destruction without having police around to stop them. Something needs to be done to restore order to this part of the country. And that’s probably going to take military action.