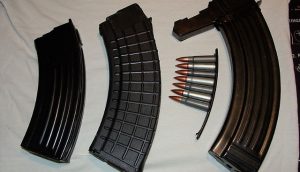 Because nothing screams freedom and liberty like forcing someone to give up their constitutional Second Amendment rights by threat of law, right?

Unfortunately for radical leftists in the state, it doesn’t seem that a lot of folks in the state are obeying the law.

The New Jersey legislature passed a law in June 2018 that made the possession of “large capacity magazines” — defined as magazines that hold more than ten rounds — illegal.

The law requires any New Jersey resident who currently owns such a magazine to either surrender it to law enforcement, modify it so that it can no longer hold more than ten rounds, destroy it, or sell it to an authorized dealer. Alternately, under certain circumstances, gun owners who possess magazines that can’t be modified can keep their magazines if they register with the state. Failure to demonstrate compliance with the law could result in a hefty fine and a prison sentence of up to 18 months.

The law was challenged in court by the Association of New Jersey Rifle and Pistol Clubs, which sought an injunction preventing enforcement of the law. The plaintiffs’ suit was finally disposed on December 5th of by an appellate ruling from the Third Circuit Court of Appeals. The ruling allowed the law to go into effect on December 10th.

Investigations conducted last week by Reason and Ammoland writer John Crump, however, were unable to find that a single New Jersey resident had complied with the law by turning in their LCMs to law enforcement. Several police departments — including the New Jersey State Police — affirmatively responded that “zero” magazines had been turned in to law enforcements, while others were simply unable or unwilling to provide answers. Overall, not a single confirmed instance of a gun owner turning in an LCM to police was found.

A source within the New Jersey State Police stated they’ve not been given any instructions as far as how they are supposed to enforce this particular law from the State Attorney General. As of now, only gun owners who come to the attention of the police for some reason will be hassled about compliance with the law.

A rough estimate has the number of magazines now made illegal in New Jersey by this law is somewhere around ten million.

This law is an unjust one, a direct violation of the Second Amendment right to bear arms, an extension of the God-given right to defend our lives, our families, and our properties. The fact people aren’t obeying this is a sign that patriots are alive and well, still willing to take tyranny head-on.

Let’s hope gun rights activists are able to get this law repealed and restore the Second Amendment to all citizens.