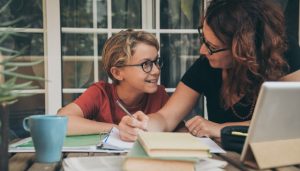 According to new census data, more than 11 percent of households in the United States are homeschooling their children instead of sending them to either public or private schools.

The actual number of students who are now being homeschooled has doubled over the course of the pandemic, as many parents have started to lose faith in traditional schools to provide an adequate and well-balanced education, while others have opted out due to concerns over the coronavirus.

Around 2.6 million students have switched from traditional schooling to home learning since the pandemic began, according to a new report from Bellwether Education Partners, commissioned by the Walton Family Foundation.

“Over the past 18 months, the parents of an estimated 11.3 million students, or nearly one in five of the nation’s schoolchildren, did not get what they wanted from their child’s school,” the Bellwether report went on to say.

The total number of children who are now being homeschooled in the United States is around 5 million.

Census data shows that home-schooling families grew at a rapid rate from 1999 to 2012 before plateauing at around 3.3% of the entire U.S. population. Recent events, including the pandemic, caused a massive spike in families looking for alternatives to traditional learning.

The data also showed that more diverse demographics have opted to turn away from traditional learning. Approximately 9.7% of white families have retreated to home-schooling, along with 12.1% of Hispanic families, 8.8% of Asian families, and 16.1% of black families, according to the report.

Romy Drucker, who serves as the K-12 education director at the Walton Family Foundation, said that the education system in the United States has been extremely slow when it comes to innovation and the pandemic has allowed parents to see some of its flaws.

“Parents want greater personalization, and this seems like a trend that’s here to stay,” Drucker stated. “Schools will have to earn back the trust of parents.”