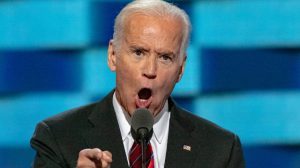 A brand new report says that Democrats in Congress are starting to get really worried about President Joe Biden’s approval rating as it continues to take a massive nose dive with all of the issues happening in Afghanistan, believing this will end up having a negative impact on the Democratic Party as a whole.

Liberal lawmakers are super worried that Biden’s handling of the troop withdrawal in Afghanistan, along with COVID, might just undermine the party and its goals in the near future, causing a major backlash that could see Democrats booted from office across the country.

A report from The New York Times says, ”

With President Biden facing a political crisis that has shaken his standing in his party, Democrats across the country are increasingly worried about their ability to maintain power in Washington, as his administration struggles to defend its chaotic withdrawal from Afghanistan and stanch a resurgent pandemic that appeared to be waning only weeks ago. …”

“On Capitol Hill, lawmakers announced congressional investigations into the administration’s handling of the withdrawal, as a handful of Democratic lawmakers weighed whether calling for the resignation of Mr. Biden’s national security adviser, Jake Sullivan, would help the president ‘reset the narrative,’ according to a Democratic House member, speaking on the condition of anonymity,” the report continues.

“The harrowing images appalled even the president’s staunchest supporters, many of whom — like a majority of the American public — support the decision to remove American troops from Afghanistan. But some of them worry the execution of the withdrawal has undermined Mr. Biden’s central campaign promise to restore a steady hand to governance, particularly on issues of national security,” The Times added.

Biden’s approval rating has fallen across multiple polls since Kabul, the capital of Afghanistan, fell to the Taliban on August 15. Since then, the U.S. has overseen a frenzied and chaotic evacuation of thousands of U.S. personnel and citizens from Kabul’s Karzai International Airport.

Biden’s polling averages for RealClearPolitics and 538 tumbled below 50% for the first time last week.

Nearly three-quarters of Americans believe that the Biden administration has botched the pullout from Afghanistan. Biden has continued to defend his decision and handling of the effort while claiming that a prior conditional agreement made between former President Donald Trump and the Taliban forced Biden’s actions.

And all of this shenanigans in Afghanistan has come along right as Biden is facing some struggles concerning proper messaging with the COVID-19 pandemic. The president has continued to push for various mask mandates and other health restrictions due to the Delta variant.

Just last week, the Transportation Security Administration stated that it was going to extend the federal mask mandate into next year.