New Report Reveals Victim Who Clung To U.S. Evac Plane And Fell From Sky, Was A Child 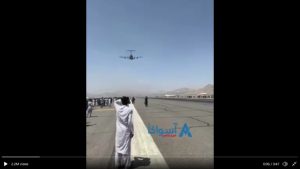 A family from Afghanistan has identified their son as one of the people who died at the Kabul international airport after falling from an evacuating U.S. military plane on Monday, according to a report from VICE News. The child, whose name has been withheld, was just 17 years old.

The child, identified by a news outlet known as Reza to protect the family, began hearing rumors that the U.S. and Canada were going to take 20,000 people with them out of the city of Kabul, according to his family. Reza, along with his brother, who is a year younger than him, headed to the airport “without telling anyone” with the hope of getting out of the country, which was now under the control of the Taliban.

“Everyone is trying to run away,” an unnamed family member told Vice News for an article published Wednesday. “It is in fear of the Taliban, they are killing people. They have all left to the airport from lack of jobs and opportunity. They want to go abroad.”

Scenes from the airport earlier this week went viral on social media, and one in particular — a video of two blips falling from an airborne plane hundreds if not thousands of feet from the ground — showed Reza in the distance falling from the sky.

Seven people in total died during the airport evacuation, including an unspecified number of Afghans who fell from an airplane, according to U.S. authorities, reports the Associated Press. One person’s remains were found stuck in a plane’s landing gear, although it’s unclear whether that is the same plane from which Reza fell.

“After Reza fell to his death, witnesses recovered his body and that of another person who fell from the same plane. His family, not knowing where Reza or his brother were, traveled to the airport after calling his cell phone and getting a response from a stranger who had found it at the airport,” Daily Wire reported.

Reza’s family identified his body after several witnesses took it outside of the airport.

“His legs and arms were gone. I brought him back myself,” a family member revealed.

“We are really upset that we’ve lost two,” a family member said to VICE. “We’ve found the body of one of them, but the other one is still missing.”

This is horrifying. And it reveals just how bad the Taliban really is. The people in Afghanistan are terrified of what the future holds. And the blood and loss is all on the shoulders of President Biden.