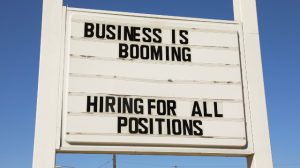 New reports have come out and revealed that employers in the United States have posted 11 million open jobs in the month of October, which almost reaches the record set back during July, and is a sign that many companies are finally confident enough in the current economy to try expanding.

A report from the government released on Wednesday also revealed that the number of individuals who are currently quitting their jobs has dropped a bit in October to 4.2 million, which is down from the September total of 4.4 million. However, that’s still the third-highest number of monthly resignations on records that date all the way back to 2000.

“The figures from the Labor Department’s Job Openings and Labor Turnover survey, or JOLTS, show that with so many companies chasing relatively few unemployed people, job-seekers have the most bargaining power they have had in at least two decades. Wages are rising at a healthy pace, particularly for lower-paid employees, though much of that bump in pay is being eroded by higher inflation,” Newsmax reported.

Here’s more from that report:

Larger paychecks are luring many employees to leave their jobs for new work, pushing up the number of quits. A high number of resignations is a sign of a strong labor market because it shows that people are confident they can find a new job. The vast majority of people who quit do so to take new jobs.

Separate data from the Federal Reserve Bank of Atlanta shows that people switching jobs are receiving bigger pay raises than those who stay put.

Job openings went up about 4 percent in October to 11 million, just beneath the 11.1 million from July. Service industries like restaurants and bars, along with hospitality services like hotels rose almost 20 percent to 1.6 million.