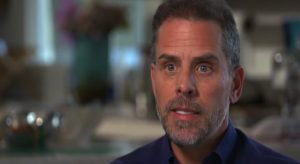 According to new reports, the Secret Service tried to get paperwork for a gun purchase made by Hunter Biden, son of President Joe Biden, from a shop located in Wilmington, Delaware back in October of 2018 after the weapon went missing.

A police document was obtained by Politico which stated that Biden’s sister-in-law, Hallie, who began a romantic relationship with him after her husband Beau, Hunter’s brother, died back in 2015, took the weapon, wrapped it in a shopping bag, and placed it in a public trash can behind a nearby grocery store.

After Hallie told him where she put the gun, Biden then told her to go and retrieve it later that day. When she went to get it, it was gone.

Local police were notified and alerted to the scene. The report noted that the missing gun caused a stir due to the grocery store being located near a school, and authorities were concerned that it could be used in a potential crime.

In addition to the police report, Politico obtained copies of the Firearms Transaction Record and a receipt for the gun dated Oct. 12, 2018. The firearm went missing on Oct. 23, shortly after it was placed in the garbage.

According to the paperwork, Biden responded “no” to a question on the transaction record that asked, “Are you an unlawful user of, or addicted to, marijuana or any depressant, stimulant, narcotic drug, or any other controlled substance?” His response came five years after he was discharged from the Navy Reserve after testing positive for cocaine. He and his family have publicly discussed his history of drug use.

Lying on this form is considered to be a felony offense, although the U.S. Government Accountability Office stated that actual prosecutions for lying on the form are fairly rare.

While both Biden and Hallie were questioned by local law enforcement, Secret Service agents tried to get the owner of the store where the gun was purchased to hand over paperwork related to the sale.

The owner refused, becoming concerned that they where attempting to hide Biden’s ownership of the gun if it happened to be used in a crime.

The agency is denying any involvement in this situation.