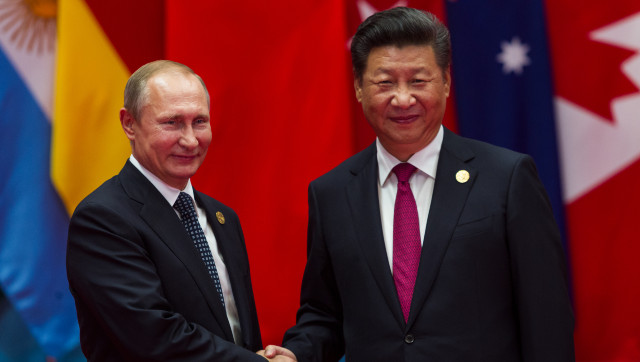 According to new reports, Russia launched its invasion of Ukraine after the 2022 Winter Olympics at the behest of China, which Moscow is apparently relying on to help them survive through the brunt of sanctions from the West.

Does this really surprise anyone? Especially after these two countries announced during the kick off of the Olympics that they were joining forces against the United States?

Moscow allegedly coordinated with Beijing on the timing of its invasion of Ukraine, though the extent to which Beijing knew about the invasion plans is unclear. Intelligence services in the U.S. and elsewhere have differing interpretations of the intelligence report alleging coordination between top Russian and Chinese officials, according to The New York Times.

The spokesman for the Chinese Embassy in Washington, Liu Pengyu, denied the findings in the Western intel report. “These claims are speculation without any basis, and are intended to blame-shift and smear China,” Pengyu told The Times.

American and European officials believe too many coincidental events took place in the lead-up to the invasion to give China the benefit of the doubt, however.

The Times then went on to report, “American and European officials have said they find it hard to believe it is mere coincidence that Mr. Putin’s invasion did not start until right after the Olympics.”

“Over the winter, Russia moved military units from its border with China and other parts of the east to the border with Ukraine and to Belarus to prepare for the invasion. The movements indicated a high level of trust between Russian and Chinese officials,” the Times report continues.

“China and Russia have been strengthening their economic, diplomatic and military ties for years. Mr. Xi and Mr. Putin met 37 times as national leaders before their discussions in Beijing ahead of the Olympics. The ambitious joint statement that the two nations issued during that meeting alarmed American and European officials, especially because it was the first time China had explicitly sided with Russia on issues concerning NATO and European security. European leaders have denounced China and Russia in recent weeks, including in speeches at the Munich Security Conference,” the Times report adds.

Russian President Vladimir Putin met with Chinese President Xi Jinping in person in the early part of February before the opening ceremony of the Olympics took place.

On February 4, both countries put out a joint statement where they said they oppose the “further enlargement of NATO,” which seems like a nod toward national security claims made by Russia against Ukraine, as well as China and Russia supporting one another.

“The sides reaffirm their strong mutual support for the protection of their core interests, state sovereignty and territorial integrity, and oppose interference by external forces in their internal affairs,” the statement read.

“The Russian side reaffirms its support for the One-China principle, confirms that Taiwan is an inalienable part of China, and opposes any forms of independence of Taiwan,” it went on to say. “Russia and China stand against attempts by external forces to undermine security and stability in their common adjacent regions, intend to counter interference by outside forces in the internal affairs of sovereign countries under any pretext, oppose colour revolutions, and will increase cooperation in the aforementioned areas.”

Folks, this is something right here that we ought to be concerned about. If Russia and China are these deep into a relationship with each other, it could spell bad news for the West.

Also, depending on how this invasion of Ukraine goes, we may end up seeing China make a play for Taiwan. That almost seems inevitable at this point. It really does feel like we’re on the brink of a major world war. Let’s pray that’s not so.