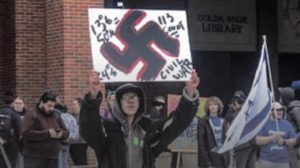 According to a brand new report, anti-Semitic incidents on the campuses of American colleges and universities are surging at “alarming rates” and have even infected the realm of online learning as students have moved over to remote education due to the coronavirus.

There have been 2,000 incidents of anti-Semitism over the last four years. Some of these incidents include swastikas being painted all over a professor’s office, a campus performer urging his audience to sing along with him as he belted out an anti-Semitic song, and then tons of other students being harassed for being Jewish or supporting the nation of Israel.

“Although campuses closed when coronavirus erupted, and nearly half of colleges began their fall semesters entirely or primarily online, antisemitism has continued both online and offline,” states the new report by Alums for Campus Fairness, an advocacy group that codified 50 of the most flagrant examples of campus anti-Semitism reported in the past three years.

The report comes as colleges, including San Francisco State University, the University of Illinois, and others, grapple with a sharp rise in anti-Semitic incidents. San Francisco University, for instance, was the subject of a civil rights lawsuit alleging “institutionalized anti-Semitism,” while the Department of Education launched an investigation last year into University of Illinois Urbana-Champaign, citing a string of anti-Semitic incidents. More than half of Jewish students on American college campuses have reported witnessing or being the subject of anti-Jewish harassment. More than 80 percent of American Jews say anti-Semitism in America has increased during the last five years, according to a 2019 study by the American Jewish Committee.

“Anti-Semitic incidents on campuses across the U.S. are on the rise at alarming rates, creating a toxic environment for Jewish students,” Avi Gordon, executive director of Alums for Campus Fairness, told the Free Beacon. Gordon is calling on alumni communities to help combat rising Jew hatred on campus, saying their access to school trustees, leadership, and faculty is critical to curbing anti-Semitism.

Many anti-Israel activists have joined hands in partnership with Students for Justice in Palestine that has actually been banned from many college campuses due to cases of Jewish students being bullied.

This kind of behavior is uncalled for. Something needs to be done to create a safer environment for Jewish students while also not trampling freedom of speech.

Liberals have become increasingly anti-Semitic in recent years as the left moves further and further down the rabbit hole of progressive ideology. It’s time to give this some serious thought.

If the left is really about racial and religious equality, surely they must be interested in stopping anti-Semitism in their ranks, right?