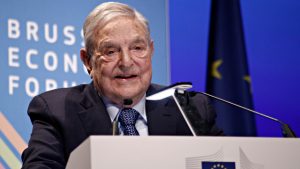 According to a new report from ProPublica, at least 18 billionaires, along with 250 other super wealthy Americans, received COVID-19 stimulus checks, paid for by taxpayers, during the pandemic, which included notorious radical leftist George Soros and his son Robert, according to records from the IRS.

The representatives of both Soroses said that the checks were returned, however, the report from ProPublica shows how many wealthy American citizens used generous tax deductions to clear chunks of their income.

Under the $2.2 trillion CARES Act package, Americans who reported $75,000 a year or less in income on their previous tax return received $1,200 in an emergency payment. Married couples received $2,400 if they had reported less than $150,000 in income. Money was sent automatically to anyone who qualified.

There were 270 taxpayers who qualified for stimulus checks even though they collectively disclosed $5.7 billion in income. All listed negative net incomes on their tax returns using tax deductions at a massive scale, according to ProPublica.

“The tax code is simply not equipped to tax billionaires fairly, or even ensure they pay anything at all,” Senate Finance Committee Chairman Ron Wyden, a Republican from the state of Oregon, went on to tell the news outlet.

Robert Dart, a member of the Dart family who owns Dart Container Corp., responsible for making red Solo cups, also received one of these checks, despite the fact he is currently worth millions.

Back in 2018, Dart reported bringing in an income that exceeded $300 million, however, the use of major deductions left him with negative $39 million.

“Mr. Dart believes that people in his position should not have received COVID stimulus funds,” the general counsel for Dart Container wrote in a statement sent to ProPublica.

“Mr. Dart did not request any COVID stimulus funds. Instead, those funds were directly deposited into his account by the U.S. Treasury without his consent as Congress determined that taxpayers with resident alien status were eligible for such payments. Mr. Dart has returned the COVID stimulus funds he received to the U.S. Treasury pursuant to instructions provided by the IRS,” the general counsel continued.