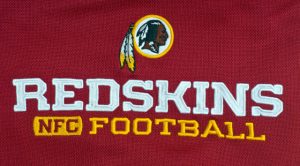 Well, according to a brand spanking new report that is now making its way across the Internet, the Washington Redskins might truly be on their way to capitulating to the angry mobs of social justice warriors demanding they change their name to something less offensive.

And it seems that new name might already have been chosen.

Folks, once this happens, they’ll be no end to what these individuals try to change and erase from our nation’s history. Just remember that.

“’We came up with a couple of names — two of them I really like,’ Redskins Coach Ron Rivera said Saturday, one day after the team announced it is undergoing ‘a thorough review’ of the name the franchise has had since 1933,” The Washington Post reported.

Rivera declined to reveal the possibilities but said he believes the most important criteria for a new name is that it is respectful of Native American culture and traditions and also is a tribute to the military. He indicated Snyder agrees with that sentiment. Warriors could fit the bill.

Keven Sheehan stated on his podcast last Friday that he had it “on pretty good authority” that the leading contender for the name change was the Warriors.

Among other possible names is the Redtails based off the nickname once used by the Tuskegee Airmen, the first African-American aerial combat unit.

While a lot of these are really cool names, the point still remains that SJWs are about to win a major victory in this war. It’s ground lost in the cultural battle against political correctness, and to be honest, we just can’t afford to lose much more.

Guess we’ll have to wait and see what the official word will be concerning the name change, if one is going to happen at all.