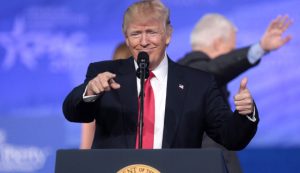 According to new reports, President Donald Trump has a few ideas for new ventures to get into once he wraps up work at the White House, whenever that might be, and it’s not good for Fox News.

Apparently, Trump is thinking of starting an online media company after his presidency is over, a competitor to Fox News, partly to spite the network, according to sources who are familiar with the president’s way of thinking.

Trump has increasingly criticized Fox in recent months over its coverage and then its decision to call the state of Arizona early for Democratic presidential candidate Joe Biden.

“He plans to wreck Fox. No doubt about it,” a source told Axios.

The president has extensive email and cell phone lists from his 2016 and 2020 campaigns that he can use to help launch a media venture. Trump may also use rallies late in the year, ostensibly for building support for his election legal fight with Biden, to bash Fox News to his base. Many of the members of Trump’s target audience for a media venture are likely Fox viewers.

The report also says that Trump is looking to get around the obstacles of starting a cable news venture by going straight to an online streaming/subscription model.

“Trump’s digital offering would likely charge a monthly fee to MAGA fans. Many are Fox News viewers, and he’d aim to replace the network — and the $5.99-a-month Fox Nation streaming service, which has an 85% conversation rate from free trials to paid subscribers — as their top destination,” Axios says in its report.

This is definitely an interesting potential project for the president. He most assuredly has enough of a fan base to make such a network successful. And this would definitely help to keep his message and platform alive, whether or not he’s in office.

Something like this would definitely cause Fox News to hit some hard times when it comes to viewers, so it’ll be interesting to see if anything actually comes to this.

One thing’s for sure, whether or not Trump gets his second term, we’ve not heard the last of him by a long shot.