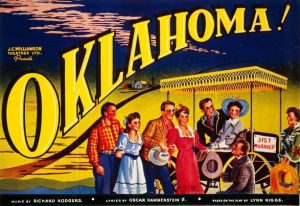 If you have ever thought that those in the entertainment industry who call for gun control are big, fat hypocrites for including endless scenes featuring irresponsible gun use and violent, criminal gun violence, never fret, they’re using that exposure to raise money to destroy real-life guns!

A new production of the classic musical “Oklahoma!” will be the first “gun neutral” Broadway show, and libs are tickled.

What exactly does “gun neutral” mean? Are they taking guns out of the show? Bahaha no of course not.

For every gun that is portrayed on stage, they’re making a donation to organizations “committed to helping solve the gun violence crisis by destroying firearms that should be out of circulation.”

Oklahoma!’s participation in the campaign is expected to be announced today by the show’s lead producer Eva Price at a Sundance Film Festival panel titled “See Change: The Call for Gun Neutral Entertainment.”

“We are honored and proud that Oklahoma! will be leading the way on Broadway by partnering with the Gun Neutral Initiative,” Price said in a statement provided to Deadline prior to the panel. “Just because a particular story calls for the presence of a particular weapon, that doesn’t mean that we have to remain complacent in America’s gun-violence epidemic. Helping to destroy firearms that shouldn’t be in circulation is both a privilege and a responsibility.”

So, while the entertainment industry could use their immense position of influence to promote safe gun use, they’d rather just stick with all the gun violence and use the money to make sure you have no right to defend yourself with a real-life gun in the event of real-life gun violence (not that Oklahoma! is exactly full of violence, but you get my point.)

See, here’s the thing: they could take all the guns out of the shows and the movies and the musicals, but then it would be “fake,” right?

Gun Neutral was launched in October by Level Forward, the entertainment company co-founded by Abigail Disney and Adrienne Becker. Described as a non-partisan effort, Gun Neutral explores ways that entertainment companies and productions can address gun violence while preserving “authenticity and artistic freedom.”

In addition to providing research, Gun Neutral encourages the practice that gives the organization its name. With gun neutrality, productions pledge to include a budget line item to help cover the cost of destroying a real-world gun and invest in community arts programs for youth in gun-violent communities.

Oh my gosh so much wrong here.

First of all, it’s great to invest in community arts programs for youth in gun-violent communities. But do these people legit think that if you get little Tommy and Suzy to join up with the local production of “Cats!” they’re just going to abandon #thuglife?

You know what keeps communities safe? Empowering citizens with “real-life” guns. Never has destroying guns ended gun violence. Not once, anywhere, in the history of ever.

I don’t know if this is just empty virtue signaling, willful ignorance, or an actual plot to keep violence-plagued communities voting Democrat, but whatever the case, it’s absurd.