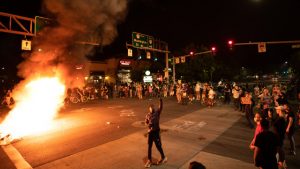 A brand new poll that was put together by Rasmussen Reports reveals that far more American voters want to see the race riots that erupted on the American streets last year to be investigated than they do the violent protests that broke out at the Capitol building back on January 6th.

This poll also includes an overwhelming majority of both blacks and Hispanics, facts which will cause the radical leftist element in this nation to throw a massive temper tantrum.

And in one example of that, 65% disagreed with Black Lives Matter activists who have claimed that Old Glory and the pro-police “Thin Blue Line” flags are symbols of racism, said the survey done with the National Police Association.

Overall, 66% said that they want the Black Lives Matter riots investigated. According to the survey, there were 574 violent clashes and over 2,000 police were injured. Just 49% said they support House Speaker Nancy Pelosi’s partisan investigation of the Jan. 6 riots.

Overall, 66% said that they want the Black Lives Matter riots investigated. According to the survey, there were 574 violent clashes and over 2,000 police were injured. Just 49% said they support House Speaker Nancy Pelosi’s partisan investigation of the Jan. 6 riots.

The report also stated that the police group said, “When the mayors of cities in which violent riots took place in 2020 refused to let police immediately stop the crimes taking place, it sent a message to violent criminals across the nation that crimes will be allowed and criminals won’t be touched. For the last year violent crimes have increased nationally and the lack of support from politicians has resulted in the number of police officers declining into a short staffing recruitment and retention crisis.”

Another interesting finding from the survey was that 53 percent of folks polled think Congress should be awarding law enforcement officers with medals for defending their cities from the violent looters and rioters that tried to destroy whole cities last year.

A staggering 76 percent of voters think young people should be taught that they need to comply with police instead of trying to resist arrest.