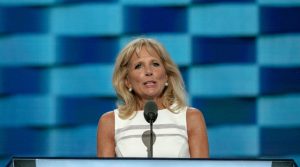 So it seems Americans still have a soft spot in their hearts for former First Lady Jacqueline Kennedy Onassis, as revealed by the fact she was voted number one in the “First Ladies Greatness Poll”  published by Zogby Analyticis.

The poll results show that Jackie O had a stunning 14-point lead over former first ladies Michelle Obama and Nancy Reagan, both in a tight race to take second place.

“It was no surprise that Jacqueline Kennedy … is still the greatest, by far. The public has always had a fascination with her style choices, jet-setter lifestyle, and movie star looks,” pollster Jonathan Zogby went on to tell the folks over at the Washington Examiner.

And Melania Trump is no longer at the bottom, edging ahead of Pat Nixon in the survey shared with Secrets.

Zogby noted that it likely helped the three most popular first ladies that their husbands, JFK, Barack Obama, and Ronald Reagan, are also among the most popular former presidents.

That’s definitely going to make radicals on the left a bit upset since they seem to think Jill Biden and her hubby are the bee’s knees, going so far into their own delusions to call President Joe Biden the best president in history.

This is why we all think liberalism is a mental disorder.