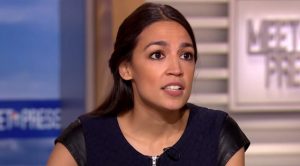 During a recent interview, Democratic Socialist Rep. Alexandria Ocasio-Cortez floated the idea of doubling the current top income tax rate to 70 percent as a means of paying for her obscene left-wing agenda.

However, would the top 20 percent of earners in America who are already paying 88 percent of all federal income taxes actually support such a steep hike.

According to a new poll, the answer seems to be yes.

Prep a barf bucket. You’re going to need it.

“People are going to have to start paying their fair share in taxes,” the self-described “democratic socialist” told CNN’s Anderson Cooper in an early January interview. “You look at our tax rates back in the ’60s, and when you have a progressive tax-rate system, your tax rate, let’s say, from $0 to $75,000 may be 10% or 15%, etc. But once you get to the tippy tops, on your 10 millionth dollar, sometimes you see tax rates as high as 60% or 70%. That doesn’t mean all $10 million are taxed at an extremely high rate, but it means that as you climb up this ladder, you should be contributing more.”

Alexandria Ocasio-Cortez suggests taxes as high as 70% on the wealthiest to pay for a "Green New Deal."

"If that's what radical means, call me a radical," @AOC tells @AndersonCooper. pic.twitter.com/fcw2YtdeSD

A new The Hilll-HarrisX survey of 1,002 voters (481 male, 521 female) conducted Saturday and Sunday found that nearly six in ten voters (59%) say they’d support Ocasio-Cortez’s 70% top tax rate idea — “at least presently,” The Hill notes. The representative, the outlet underscores, has not actually submitted any legislation; in other words, a majority of people like the idea in theory — and without any additional tax hikes mentioned beyond a 70% tax on $10 million and up.

“Currently the top tax rate is 37%,” the survey question reads. “Would you favor or oppose a tax proposal that would apply a 70% rate to the 10 millionth dollar and beyond for individuals making 10 million a year or more in reportable income?”

When The Hill drilled down a little further into the data, it found that a 70% tax rate on $10 million or more had majority support among both men and women, Southerners and rural voters, both parites and Independents — and even had pretty solid support among Republican men.

This is a horrifyingly high number and any American who claims to be conservative and backs this idea needs to have their head examined.

Higher taxation will only cause a stagnation in our country’s economic prosperity. It will stifle creativity and innovation, as those two things often lead to financial growth, and with taxes punishing someone for success, what’s the point of making a better mouse trap?

This is the point that a lot of modern day liberals just can’t seem to get in through their thick heads. Taxation is a deterrent. It does not promote things our society needs to be healthy.

What will it take to get this point across?