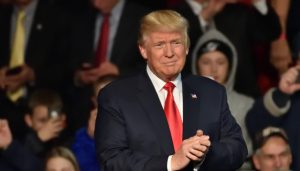 The vast majority of Republican voters say that they would totally back Donald Trump running for president again in 2024, according to the results of a new poll published by Politico.

That’s not hard to believe at all. Former President Trump did a lot of good policy-wise for this country. Not to mention he provided a voice for those who have been marginalized by the Democratic Party for years and years.

Over half, 56%, of Republican voters say Trump should run again in 2024, while 36% of Republicans think he should probably or definitely not run again, according to the Politico Playbook.

A Morning/Consult Politico poll released Wednesday shows Republicans are split on whether they would support Trump starting a third party or stick with being a member of the GOP.

The poll also shows that half of Republicans say Trump should play a major role in the Republican Party even though he is no longer president.

Here are the full poll results:

The Republican Party has been fundamentally transformed by Trump being president over the last four years. That’s a truth the folks in the establishment don’t want to hear, but that doesn’t mean much in the end.

Americans have had enough of the establishment. They want someone who means what he says and says what he means. It’s that simple. Someone who isn’t driven by political ambition but really does want what is best for the country.

If Republicans are smart, they won’t fight against that. They’ll embrace it and run strong candidates in a similar style so they can take back control of Congress in 2022.