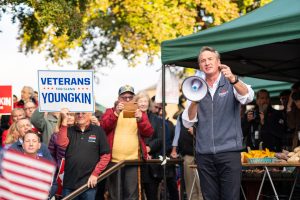 A new poll published by the Trafalgar Group has revealed that Glenn Youngkin has a 2.3-point lead over his competition in the Virginia gubernatorial race, Terry McAuliffe on the day before the election.

FINAL @trafalgar_group #VAGov race #Poll#Youngkin has 2.3% lead which could grow by capturing most late deciders.

“This race is neck and neck,” Youngkin went on to say during a speech given during a rally on Monday in Richmond, Virginia. The candidate’s comments aired live on Newsmax‘s “John Bachman Now.”

“We got to get it done tomorrow. The entire nation is watching us,” Youngkin added.

The race between Youngkin and McAuliffe, who has had former President Barack Obama, President Joe Biden, and Vice President Kamala Harris stump for him, is considered a bellwether for the support for the current administration and Democrats’ control of Congress.

The fact the final poll puts the race within the margin of error in the final days before polls close Tuesday night puts an onus on the late ground game of both candidates. Youngkin is completing a 10-day bus tour in the state.

Youngkin has sided squarely with parents against indoctrination in schools and has vowed to oppose Biden administration vaccine mandates in his state. McAuliffe, who served as governor of the state starting during the Obama administration, has adopted many of the Obama-Biden policy positions, pitting an Obama-era progressive Democrat against a conservative in a key battleground state before the 2022 midterm elections.

Newsmax’s John Gizzi reported that there’s potential for a GOP sweep in the state of Virginia.

“I think Youngkin will win by around 3%,” historian Henry Olsen went on to say during a discussion with Gizzi.

The Trafalgar Group conducted this final poll before the election between the dates of October 29-31, having surveyed 1,081 potential Virginia voters.

The margin of error for the survey is plus or minus 2.98 percentage points.