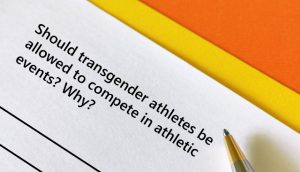 A brand new poll that was put out by a left-leaning news outlet has discovered that there is broad support in banning biological males from being able to compete against biological women and girls in female athletics.

Why in the world is the left so darn delusional as to think that the vast majority of common sense Americans would be okay with seeing dudes dominate girls on the playing field? This is just common sense.

“Former President Donald Trump railed against transgender athletes in female sports in his CPAC speech a few weeks ago. Other prominent voices on the right have joined in, calling it an example of political correctness having a real-world impact. Our latest POLITICO/Morning Consult poll shows broad support for the GOP position, extending across gender, age and, to a lesser degree, party,” Politico said in a recent report. “Overall, 53% of registered voters support banning transgender athletes from competing in women’s sports, versus a third who oppose such a ban.”

One of the big takeaways that has some people so shocked is that the poll revealed more millennials support the ban than baby boomers.

Politico highlighted the following numbers from their survey:

🚨Playbook PM kicks off with the results of a POLITICO/Morning Consult poll showing broad support for the position to ban transgender athletes from competing in women's sports. https://t.co/T2CZNdsPkB pic.twitter.com/DUrUhbgTqQ

Numerous states have started considering legislation to protect girls from having to compete against biological males in sports, and legislation on similar issues.

As mentioned by Politico, Trump hammered President Joe Biden and the Democrats during his CPAC speech over the issue.

“Joe Biden and the Democrats are even pushing policies that would destroy women’s sports,” former President Donald Trump said. “Lot of new records are being broken in women’s sports. Hate to say that, ladies, but got a lot of new records that [are] being shattered. You know, for years, the weightlifting, every ounce is like a big deal for many years. All of a sudden, somebody comes along and beats it by 100 pounds.”

“Now, young girls and women are incensed that they are now being forced to compete against those who are biological males,” Trump added. “It’s not good for women. It’s not good for women’s sports, which worked so long and so hard to get to where they are. The records that stood for years, even decades, are now being smashed with ease, smashed. If this is not changed, women’s sports, as we know it, will die, they’ll end, it’ll end. What coach, if I’m a coach, you know, I want to be a great coach, what coach, as an example, wants to recruit a young woman to compete if her record can easily be broken by somebody who was born a man? Not too many of those coaches around, right? If they are around, they won’t be around long because they’re gonna have a big problem when the record is, ‘We’re 0-16, but we’re getting better.’ No, I think it’s crazy, I think it’s just crazy what’s happening. We must protect the integrity of women’s sports — so important.”

I mean, for a party that claims to “follow the science,” these folks who are advocating that actual men be allowed to compete against women is plain ridiculous. You’re either a male or a female. That’s how it has always been. That’s how it will always be. You can’t change concrete facts no matter how delusional or mental ill you might be.

It’s time to stop this nonsense.