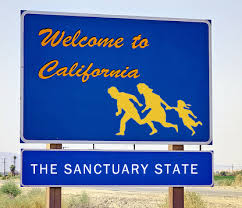 Thanks to Democratic governor Jerry Brown a new bill has been signed into law making California a sanctuary state.

And now they have the signs to prove it! These signs are nothing short of hilarious although, sadly, quite accurate.

The signs were put up north of Lake Havasu, Arizona, Primm, Nevada and on Highway 95 in California and read: “OFFICIAL SANCTUARY STATE, Felons, Illegals and MS13 Welcome! Democrats Need The Votes!”

All I can say is GOOD LUCK California. You’re gonna need it!

“By passing this bill, California politicians have chosen to prioritize politics over public safety,” he said.

The signs may have been intended as a joke, but California’s new law is nothing to laugh about.