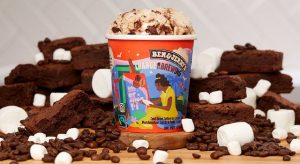 Ben and Jerry’s, one of the leading ice cream makers in the world, is putting out a brand new flavor this week and the super liberal company has stated that it will help aid the “Defund the Police” movement.

Because I always want a helping of disgusting liberal politics with my scoop of sweet, delicious ice cream. Who doesn’t?

The company debuted the flavor on Monday, stating that a portion of the profits brought in from the sale of the product would then be given to help supplement Missouri Democratic Congresswoman Cori Bush’s $10 billion bill to help hire social workers to perform some of the safety tasks that used to be handled by local police.

“Introducing Change is Brewing,” the Vermont -based company went on to say in a tweet. The “flavor helping to transform the nation’s approach to public safety to one that prioritizes community needs, in collaboration w/ @Mvmnt4BlkLives. Join us in supporting the People’s Response Act!”

The flavor is a mix of cold-brew coffee ice cream, marshmallow swirls, and fudge brownies, the company’s website says .

“Grab your spoon & dig into a flavor boldly celebrating safety & liberation for all,” the description of the flavor goes on to say. “It’s time to divest from systems that criminalize Black communities & invest in a vision of public safety that allows everyone to breathe free.”

🍦NEW FLAVOR!☕️
Introducing Change Is Brewing, the flavor helping to transform the nation’s approach to public safety to one that prioritizes community needs, in collaboration w/ @Mvmnt4BlkLives. Join us in supporting the People's Response Act! More: https://t.co/OoCYKSIuCP pic.twitter.com/8xQgWPBVIs

Customers who buy the ice cream online can sign up for email notifications about Bush’s bill to defund the police , join the Movement for Black Lives, and support the People’s Response Act.

“The flavor supports the vision of the world in which every community is safe, and everyone, including black and brown people, can thrive,” Ben and Jerry’s U.S. Activism Manager Jabari Pall said at a press conference, the New York Post said in its report .

The artwork featured on the carton of the ice cream features a depiction of a black woman and says “liberation” on it.

“Defunding the police has to happen,” Bush stated just last month. “We need to defund the police and put that money into social safety nets because we’re trying to save lives.”