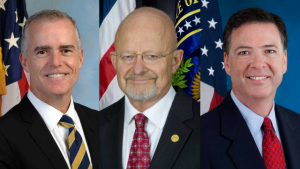 You just can’t make this stuff up–every day, more and more evidence surrounding the Russia investigation leads right back to the bitter outgoing administration that couldn’t stand the fact that Trump got elected.

The crazy thing is, of course, that if they coordinated with each other and the media to create the Russia collusion scandal, which new evidence suggests they very well may have, they’ve actually been successful at perpetuating the fabricated scandal for over a year now.

The Daily Wire’s Ryan Saavedra reports that “The Committee on Homeland Security and Governmental Affairs released new emails on Monday night that allegedly show that Obama administration officials coordinated with each other to help CNN run a damaging story on President-elect Donald Trump based on salacious and unverified information contained in a politically motivated dossier financed by Trump’s political enemies.”

“The emails, obtained by Sen. Ron Johnson (R-WI), show that the Obama-era officials used coded language to refer to the Steele dossier,” he adds before providing a timeline of events:

1. January 6, 2017, 9:44 a.m. FBI Chief of Staff Jim sent an email to unspecified recipients stating, “the director is coming into HQ briefly now for an update from the sensitive matter team.”

4. January 8, 2017, 12:08 p.m. Then-FBI Deputy Director Andrew McCabe sent an email to senior FBI leadership with the subject line “Flood is coming.” Mr. McCabe wrote, “CNN is close to going forward with the sensitive story… The trigger for them [CNN] is they know the material was discussed in the brief and presented in an attachment.”

It was two days later that CNN ran the now-notorious Steele dossier story along with BuzzFeed (what alternate universe are we living in that BuzzFeed is now respected news, by the way?) which of course we now well know was the product of Clinton opposition research.

“To date, there is no public evidence that the FBI ever investigated the leaks to media about the briefing between Trump and Comey,” notes The Federalist‘s Sean Davis. “When asked in a recent interview by Fox News Channel’s Bret Baier, Comey scoffed at the idea that the FBI would even need to investigate the leak of a secret briefing with the incoming president.”

Saavedra points out that when Clapper encouraged Comey to meet with Trump about the allegations contained within the Steele dossier was the moment the Russia collusion hysteria began, and that Comey would eventually find himself fired for his refusal to state publically that Trump was not under federal investigation.

“Comey’s refusal to admit publicly what he kept telling people privately led to his firing,” writes The Federalist‘s Mollie Hemmingway, “That led to Comey leaking multiple memos in order to get a special counsel appointed out of revenge. That special counsel has utterly distracted multiple agencies and embroiled all three branches of government at the highest levels.”

“All over a document that was secretly funded by Hillary Clinton and the DNC, contracted by a Democrat research firm with ties to the Kremlin, and authored by a shady foreign spy whose relationship with the FBI was terminated because he lied to them.”

This is insane stuff! When is the other shoe going to drop?