New Chicago Mayor’s Top Priority: Finding Out Why Jussie Smollett Was Let Off 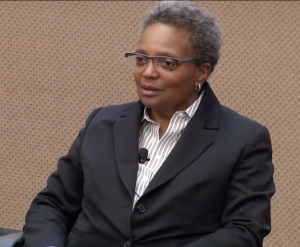 Well, this is a pleasant surprise.

In such a divided time as this, the shocking case of Jussie Smollett has actually managed to create some unlikely unity among the right and the left.

By that I mean, everyone from far-left progressives to the MAGA-hatted white people he slandered with his orchestrated hate crime (OK, fine, allegedly orchestrated) are pretty ticked off that his charges were dropped.

Lori Lightfoot made history on Tuesday night as the first black female mayor elected in the Windy City, and also the first openly gay mayor, but she’s not exactly the intersectional queen you’d imagine.

Well, she is, but many on the left actually don’t like her very much, believe it or not, because she’s actually—gasp!—friendly towards the police.

Speaking of which, while she hasn’t even been sworn in yet, she’s already declared that her first order of business will be getting to the bottom of why in the name of all that is holy Jussie Smollett was let off the hook for seeming to have so obviously staged a hate crime against himself.

And remember, he wasn’t declared innocent. The charges against him were dropped nearly inexplicably by State’s Attorney Kim Foxx and Smollett forfeitted his $10,000+ bond. I don’t know about you, but if I was innocent of a crime of which I had been accused, I most certainly would not be letting the state keep one cent of my money, let alone tens of thousands of dollars.

In an interview with MSNBC Wednesday, Lightfoot pledged to get to the bottom of the Smollett case, and suggested that Smollett needs to be “held accountable.”

“The State’s Attorney’s office here which made the decision unilaterally to drop the charges has to give a much more fulsome explanation,” Lightfoot said, according to The Wrap.

“We cannot create the perception that if you’re rich or famous or both that you got one set of justice and for everybody else, it’s something much harsher. That won’t do, and we need to make sure that we have a criminal justice system that has integrity,” she continued. “The state’s attorney’s office has to provide more information about the rationale for the decision to drop the charges.”

When asked about the evidence for prosecuting Smollett, and whether she believed Smollett was innocent of the charges, which came from both the prosecutor’s office and a grand jury, Lightfoot was non-committal.

“I saw … a very compelling case,” she said, “with videotapes, witness statements, and other information that looked like he had staged a hoax. And if that happens, he’s got to be held accountable.”

Lightfoot’s comments sound a lot like those of outgoing mayor Rahm Emanuel, a notorious progressive who nonetheless made no secret of how abhorrent he thought Jussie’s crimes and the subsequent dropping of charges were.

Whatever is going on in the State’s Prosecutor’s office, the notoriously corrupt Chicago government would most certainly do well to figure it out.